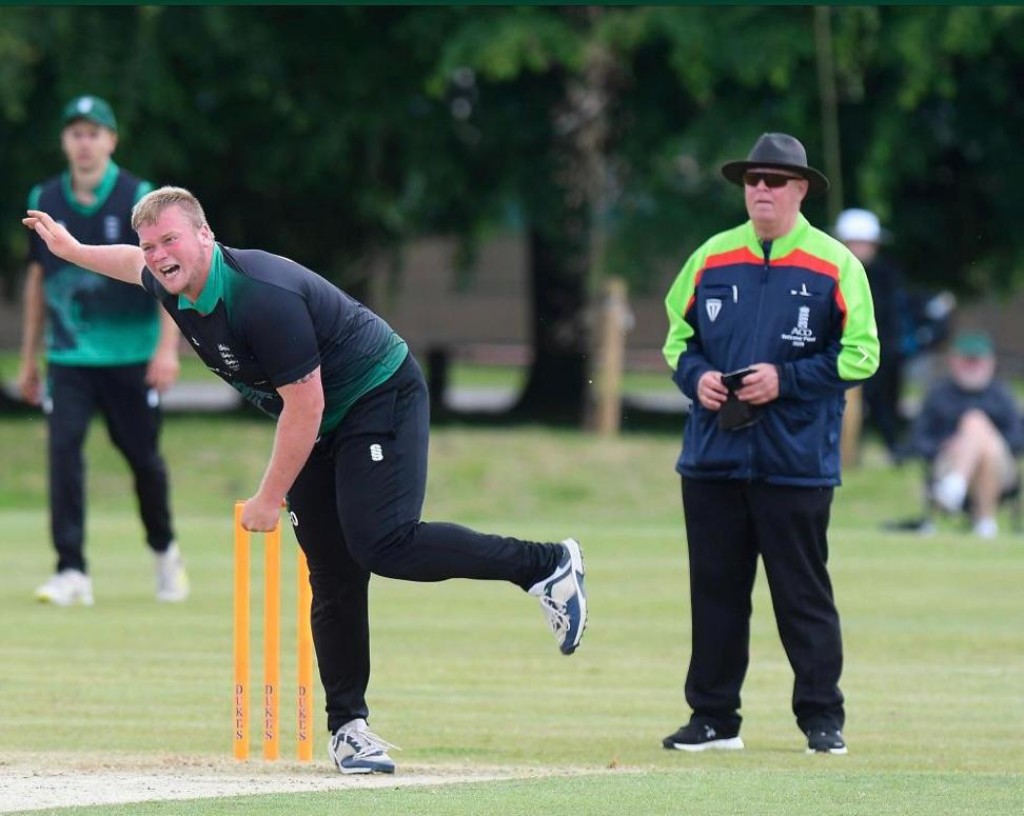 Cambridgeshire booked their place in the quarter-finals of the National Counties Trophy with a tense two wickets win over Suffolk in their final Group Three match at Sudbury.

Wayne White, the former Derbyshire, Leicestershire and Lancashire all-rounder, used his experience to see Cambridgeshire to a victory target of 196 with an unbeaten half century.

Cambridgeshire appeared to be well placed at 103 for three but they slipped to 158 for seven before White was joined by his former Leicestershire team-mate James Sykes in and eighth wicket partnership that steadied the ship.

Sykes contributed only nine to the partnership of 33 but he kept White company for seven overs and only five were needed for victory when he was dismissed.

Suffolk’s total of 195 was based around a second half century in as many Trophy innings from Essex opener Nick Browne.

Browne shared a fifth wicket partnership of 59 with Matt Allen (46) while Ben Clilverd took four wickets for Cambridgeshire who are guaranteed to finish top of the group.

Next Sunday’s match between Cheshire and Suffolk at Didsbury will decide who joins Cambridgeshire in the last eight.

Cheshire ended Shropshire’s hopes of progressing further and improved their own prospects with a four wickets win in the first county match staged at Wem in 13 years.

Shropshire needed 64 from 48 balls on debut from Bridgnorth’s Sam Baugh to lift them from 127 for six to 228 all out.

Captain Rob Sehmi and Sam Perry responded with a brisk opening partnership of 98 and although Shropshire spinners Sam Whitney, Matty Simmonds and Graham Wagg managed to peg Cheshire back they still got home with four wickets and almost six overs to spare.

Wiltshire missed their chance to guarantee their place in the quarter-finals as they were trounced by 149 runs by Wales NC in the first senior county match played at Llandysul.

A win would have taken Wiltshire through to the last eight but they were shot out for 85 and now sit out the final round of group matches next Sunday.

It still remains mathematically possible for Wiltshire to qualify from a tight Group Four, in which they are one of three teams with four points, but they will require other results to fall right for them.

Wales were indebted to Callum Nicholls – son of former Leeds United and Cardiff City footballer Ryan – and Morgan Bevans for getting them to a total of 234 for eight.

Wiltshire captain Ed Young took four for 28 with his left-arm spin but Wales’ win was sealed by a solid team bowling display in which all four bowlers used took at least two wickets each.

Staffordshire’s hopes of progressing further suffered a major setback after Dorset routed them by nine wickets in quick time at West Bromwich Dartmouth.

Staffordshire were shot out for 115 after they opted to bat first with slow left-armer Rob Pack returning his competition-best figures of five for 18 against some feckless batting.

Dorset coasted home with almost 33 overs to spare with former Hampshire opener Oli Soames crashing 65 not out and sharing an opening partnership of 72 with Jacob Gordon.

Northumberland suffered their first Trophy defeat of the season by 70 runs against Oxfordshire in a high-scoring match at Jesmond that featured four centuries.

Former Herefordshire left-hander Jamie Harrison made a spectacular debut for Oxfordshire by thumping 134 from 100 balls with 14 fours and seven sixes.

Harrison and Tom Condon added 162 for the second wicket before Oxfordshire captain Jonny Cater continued the assault with a 52-ball century that included eight sixes.

Oxfordshire’s total of 393 for nine was their highest in the competition and it required Northumberland to equal their highest-ever total to win the game.

When John Oswell and player/coach Stuart Poynter were together the improbable seemed possible as they each made rapid centuries – their first in the Trophy – and shared a third wicket partnership of 218.

Oswell made 108 from 84 balls, Poynter 109 from 93 balls, but they were dismissed within ten runs of each other and Northumberland lost their last six wickets for 42 with off-spinner Max Mannering taking five wickets.

Herefordshire ended their Trophy campaign winless after they went down by 33 runs to Lincolnshire at Bracebridge Heath.

There were maiden county centuries for Tom Keast (Lincolnshire) and Olly Walker (Herefordshire) in a match that decided the Group One wooden spoon.

Keast shared a fourth wicket partnership of 156 with Ben Wright while Walker fought a lone battle in reply, making 115 from just 88 balls with ten fours and seven sixes.

Holders Berkshire bounced back from a batting collapse to dismiss Bedfordshire for 85 and seal a 144 runs win at Wargrave in Group Two.

There was no hint of trouble when Euan Woods and Archie Carter added 163 for Berkshire’s second wicket but they lost their last nine wickets for 60 with slow left-armer Archie Houghton again catching the eye with his maiden five wicket haul.

Houghton also top-scored with 32 but his runs came after Bedfordshire had crumbled to 43 for eight against the seam bowling of Tom Nugent and Andy Rishton, who returned combined figures of 9-1-39-4, and Luke Beaven’s left-arm spin.

The margin of victory helped to improve Berkshire’s net run rate and kept them ahead of Cornwall who beat Hertfordshire by 21 runs in a rain-shortened game at Redruth.

Hertfordshire seamer Jigar Mehta returned competition-best figures for the second time in a week, improving the five for 30 he took against Devon last Sunday, to six for 33.

But Ateeq Javid, the former Warwickshire and Leicestershire opener, anchored Cornwall’s innings with 72 from 131 balls – which included only two fours – before Matt Robins (61) and Dan Lello (45) supplied late acceleration.

Dominic Chatfield had just completed a solid half century when the rain arrived with Hertfordshire short of their DLS target from 34 overs.