National Counties XI secured their place in the final day of the Dream11 European Championship with crushing victories over Netherlands and Belgium in Malaga.

National Counties, who are representing England in the 15-nation T10 tournament at the Cartama Oval, first beat Netherlands by eight wickets and then gained revenge for a surprise defeat by Belgium earlier in the week by beating them by 80 runs in the second match.

National Counties will now play Belgium in a play-off match on Friday October 8 after and eliminator between hosts Spain and Netherlands with the final scheduled for later in the day.

Harrison Ward and Dan Lincoln laid the foundations for the victory over Belgium with an opening partnership of 116 in six overs.

Ward, of Oxfordshire and Sussex, plundered 81 from 26 balls – his second half century of the day - with ten sixes and four fours while Berkshire’s Lincoln, National Counties’ captain, struck five sixes in his 25-ball 62.

After Ward departed Tom Bevan of Wales NC ensured there was no respite for Belgium’s bowlers as he cleared the ropes four times in his 28 from ten balls which helped National Counties to 179 for three.

Belgium were then kept in check by accurate bowling with Hertfordshire paceman Zaman Akhter taking three for 16 in his two overs and Wiltshire’s Arthur Godsal one for two in his only over.

Against Netherlands, Herefordshire leg-spinner Alex Russell was the pick of the National Counties bowlers as he took three for 21 in his two overs.

Netherlands posted 114 for six from their ten overs but Ward ensured that National Counties made light work of what appeared a testing chase by striking eight sixes and three fours in his 22-ball 68 not out.

Berkshire’s Andy Rishton weighed in with 24 from ten balls, with three sixes, and National Counties secured victory with 15 balls to spare. 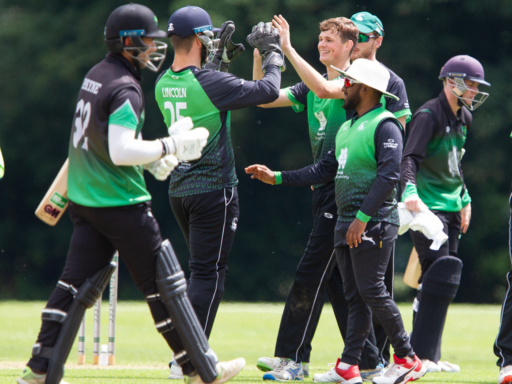