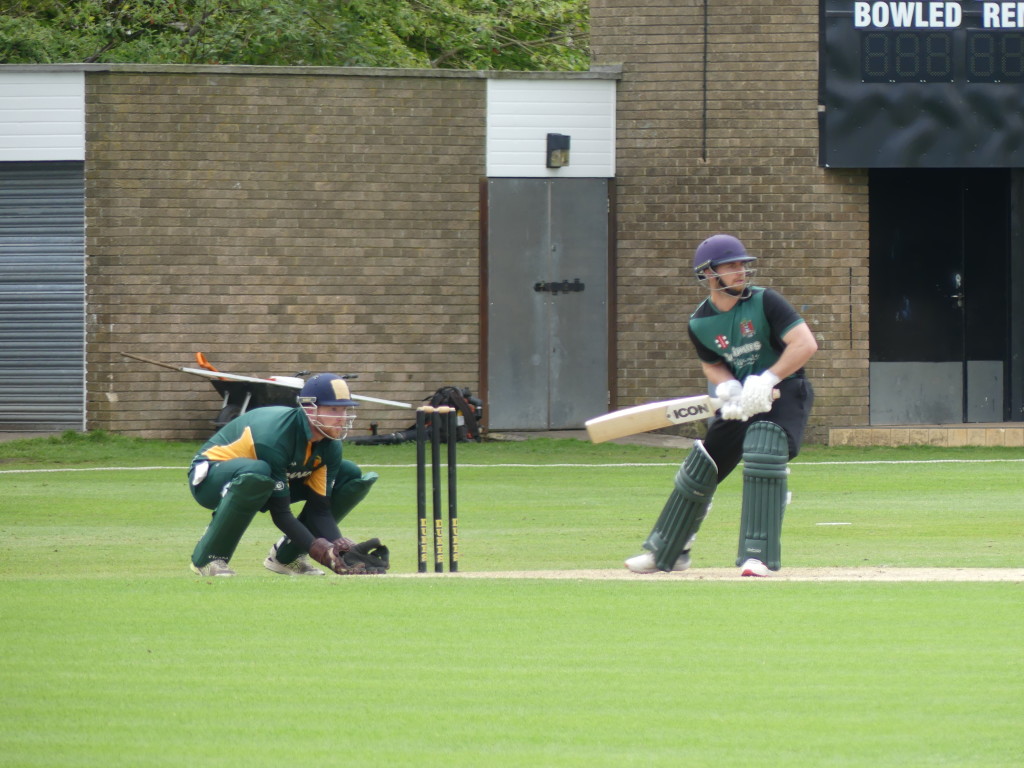 Cumberland opener Sam Dutton produced the eye-catching performance of the group stages of the 2019 T20 competition by enjoying himself at the expense of Northumberland’s attack at Jesmond.

Dutton, who plays his club cricket for Blackpool, made 167 runs in the day without being dismissed with an unbeaten 116 in a ten wickets win in the opening match of the day followed by 51 not out in a seven wickets victory in the second.

Dutton’s second T20 century of his career came from just 46 balls and he shared an unbroken opening partnership of 179 with Cumberland captain Gary Pratt, the former Durham batsman. Pratt finished unbeaten on 58 from 51 balls, four fewer than Dutton faced for his 116, which included seven sixes.

Northumberland’s 175 for four included an unbeaten half century from James Thompson and 29 from former Durham, Gloucestershire and England international Phil Mustard. On most grounds it would have been competitive but on one with short straight boundaries it proved inadequate as Cumberland chased it down with 14 balls to spare.

Cumberland’s second win was even more emphatic with Josh Fallows, the Leeds/Bradford MCCU seamer taking four for 14 and Blackpool off-spinner Josh Boyne three for seven to skittle Northumberland for 97.

Dutton again led the sprint to victory with seven overs to spare with a more measured 33-ball half century.

Essex batsman Rishi Patel announced himself in spectacular fashion with a brilliant 101 from just 63 balls for Hertfordshire against Suffolk at Ipswich School.

But Patel, who made his Essex debut in the Royal London One Day Cup earlier in the season, still finished on the losing side as Suffolk got home by two wickets.

Earlier in the day, Patel made 49 from 34 balls to set up a 35 runs win against a Suffolk attack that included Tymal Mills, the Sussex and England T20 international fast bowler.

Mills began his county career with Suffolk and re-appeared for them for his first competitive cricket of 2019 after a hamstring injury forced him to withdraw from a Big Bash contract with the Hobart Hurricanes.

Mills – who went wicketless – conceded 26 in his first two overs but he returned at the end of the innings and gave away just a single from his third over and six from his last.

Peter Burgoyne, the former Derbyshire and Sussex all-rounder, also impressed in both of Herefordshire’s matches in the opening round of group matches against Oxfordshire at Brockhampton.

Burgoyne, who spends his winters playing darts professionally on the European circuit, slammed 97 from 63 balls in the opener but it was not quite enough to deny Oxfordshire who got home by six wickets in a last-ball thriller.

Oxfordshire captain Jonny Cater responded with an unbeaten 57, which included four sixes, to help his side chase down 158.

Herefordshire took their revenge in the second match by eight runs with Burgoyne completing a productive day with 72 from 44 balls.

Burgoyne also bowled three tight overs and ran out dangerman Gareth Andrew as Oxfordshire were restricted to 133 for nine.

Berkshire slow left-armer Luke Beaven took a hat-trick – including two victims stumped off wides – in the opening match of their title defence against Shropshire at Whitchurch.

But Beaven’s efforts were not enough to save Berkshire from an 11 runs defeat although they gained swift revenge with a 12 runs win in the second match.

Buckinghamshire’s pursuit of their first National Counties honours since 2009 saw them become the first side to qualify for Finals Day.

They needed only a point from their double-header against Shropshire at Gerrards Cross to top their group they and made certain with an emphatic double with victories by seven wickets then 71 runs.

Northamptonshire’s Saif Zaib throttled Shropshire in the opener by taking four wickets with his left-arm spin before former Lincolnshire opener Conrad Louth saw Buckinghamshire home with more than five overs to spare with an unbeaten 65 from 48 balls.

In the second match Shelvin Gumbs pummelled 82 from 47 balls, including six sixes.

Earlier in the tournament Louth (70 from 34 balls) and Zaib shared a second wicket stand of 94 and former Derbyshire batsman Charlie Macdonnell made 96 runs in the day without being dismissed to help Buckinghamshire complete a double over Oxfordshire at High Wycombe.

Cheshire opener Ollie Law marked his first county appearance in four years with 88 from 55 balls, including seven sixes, but it was not enough to prevent Northumberland from completing a double Jesmond.

Chester Boughton Hall batsman Law’s previous match for Cheshire had seen him make a century in the 2015 T20 final but this time he was eclipsed by Chris Peareth (Dunnington) who saw Northumberland home with an over to spare in the opener with an undefeated 97 from 55 balls.

Dorset has a rich history of players coming through the age groups and into the senior side, as...