Cambridgeshire were shot out for 40, the joint lowest National Counties Championship total in 36 years, on the opening day of their Eastern Division One match against Staffordshire at Longton.

Oxfordshire were also dismissed for 40 by Devon in 1994, the lowest total since Northumberland were shot out for 22 by Hertfordshire at Hertford in 1985.

Cambridgeshire’s total was only three more than their lowest-ever score in the competition, made against Suffolk at Bury St Edmunds in 1904 and it was only during a last wicket stand of 13 between Mark Smith and Jack Ormsby that they avoided a new low.

Ormsby was called up for only his second Championship appearance and first in three years following positive COVID-19 tests in Cambridgeshire’s squad which led to a number of players having to self-isolate.

The selection headaches provided a little mitigation but could not fully excuse Cambridgeshire’s collapse after acting-captain Wayne White won the toss and batted first.

Seamer Alex Coates enjoyed himself on his home ground by taking four for 25 and there was no respite for Cambridgeshire when Staffordshire captain Peter Wilshaw rotated his bowlers as James Cox took four for five from six miserly overs.

Despite the early loss of Alex Mellor, Staffordshire were only one run behind at lunch and they proved that there were no demons in the pitch by making remorseless progress in the second and third sessions.

Zen Malik made 102 from 132 balls and shared a third wicket partnership of 169 with Michael Hill as Staffordshire built a commanding lead of 246 with power to add.

Lincolnshire were also to reflect on their decision to bat first at Sleaford where Suffolk’s left-arm seamer Matt Wareing took his second five wicket haul of the season.

Sam Evison made an unbeaten 42 on his first Championship appearance in three years but Lincolnshire’s 160 all out was overtaken before the close with Darren Ironside, Kryan Young and Joe Gatting all making half centuries.

Young and Gatting added 116 in an unbroken third wicket partnership which gave Suffolk a lead of 60 at the close.

Oxfordshire again proved a thorn in the side of defending champions Berkshire as they took the first day honours at Thame in Western Division One.

Opener Ollie Ebsworth-Burland again enjoyed himself on his home club ground by anchoring Oxfordshire’s first innings with 81. Ebsworth-Burland made a century on his only previous county appearance two years ago, also at Thame.

He shared a fifth wicket stand of 95 with captain Jonny Cater, which rescued Oxfordshire from 76 for four before George Tait (71) and Gareth Andrew (40) added 99 for the seventh wicket.

Andrew then took three for 18 to reduce Berkshire to 27 for four before Euan Woods and Andy Rishton took them to 53 for four at the close.

Wiltshire opted to bat first under heavy cloud cover and were soon in trouble at 38 for five before Chris Aubrey (40) and Ben Draper (35) shored up the innings.

Wiltshire were eventually dismissed for 146 after a stoppage for rain and Cheshire replied with 49 for two, with debutant Henry Dobson making all but seven of those runs in a confident innings.

Herefordshire improved their promotion prospects from Western Division Two thanks to five wickets from pace bowler Awais Mohammed against Wales NC at Eastnor.

Mohammed, who plays for Berkswell in the Birmingham & District Premier League, was making only his second appearance for Herefordshire but he tore through Wales’ top order to 65 for seven.

Herefordshire failed to build on an opening partnership of 82 between Ben Chapman-Lilley and captain Matt Pardoe (42) after Pardoe had opted to bat first.

Bull and Pearce then combined with the bat to help Wales recover to 94 for seven at the close.

Cornwall opener Olly Westbury enjoyed himself against Shropshire, his former county, by making a his first century in the competition at Bridgnorth.

Westbury played for Shropshire between 2016 and 2019 while he was on Worcestershire’s staff but he was recruited by Cornwall earlier this season.

He made 124 not out from 250 balls before being run out having shared a fourth wicket partnership of 114 with Matt Robins (73).

Only 40 overs were bowled at Jesmond where Eastern Division Two leaders Bedfordshire made brisk progress to reach 175 for two against Northumberland whenthe rain cleared.

James Kettleborough and George Thurstance both made unbeaten half centuries in an unbroken third wicket partnership of 101.

Half centuries from Sam Dutton and Paul Hindmarch, who added 87 for the sixth wicket, lifted Cumbria from 114 for five to 297 all out against Buckinghamshire at Furness.

There were useful contributions down the order from Championship debutants Wyll Stanway (24) and James McGown (35 not out). 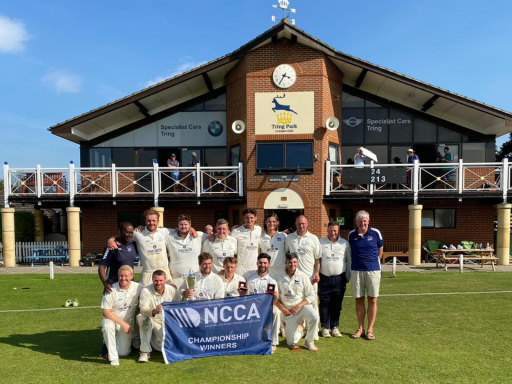